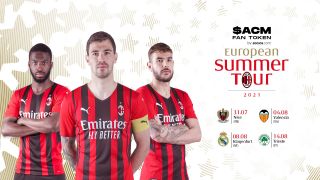 AC Milan have finally confirmed when their four remaining preseason fixtures take place, with games in France and Spain to come.

In addition to facing Modena on Saturday, Milan have confirmed through their official website that they will be taking part in the 2021 $ACM Fan Token European Summer Tour, with four games to proceed the start of the Serie A season.

On 8 August 2021 Milan will face Real Madrid in Klagenfurt, Austria. Kick-off will be at 6:30pm local time and the game will see two of the most decorated clubs in football history face off for the #AthletesVersus Cup, supporting no profit organization Athletes Versus’s efforts to combat all forms of discrimination.

Finally, on 14 August 2021 Milan will play Greek side Panathinaikos in Trieste, Italy. The game will be held at the Stadio Nereo Rocco and will kick off at 8:30pm.