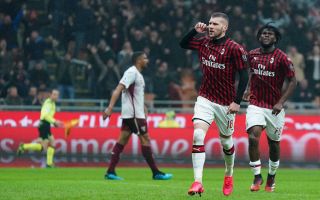 Official: Milan confirm San Siro will be at 50% capacity for Cagliari game

AC Milan have announced that they will be able to welcome 50% of the capacity of San Siro for the first home game of the season.

It has been a long time since the Rossoneri fans were able to see their team at home, with the last game that Milan welcome fans being all the way back in February of last year for the 1-0 win over Torino during which Ante Rebic scored the winner.

Now, Milan have officially announced that the club will be re-opening the San Siro Stadium to fans this season. In line with the latest government guidelines, the club will be reopening the stadium at a 50% capacity and will be offering single-game tickets only for its home games to ensure that as many fans as possible can watch Milan in action.

Tickets for the Rossoneri’s first Serie A home match against Cagliari, to be played on Sunday, August 29 at 8:45pm CEST, will go on sale on acmilan.com, singletickets.acmilan.com and at the Casa Milan Ticket Office starting from tomorrow.