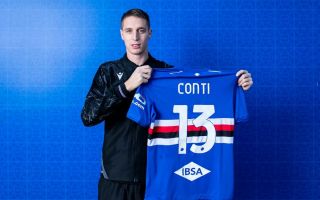 AC Milan have officially announced that Andrea Conti has left the club to sign for Sampdoria, completing the first operation of the January window.

Through a statement on their official website, Milan have confirmed that Conti has moved to Sampdoria on a permanent basis and therefore not a loan move as some sources reported. The club also went on record to thank Conti for the commitment and professionalism that he has always displayed and wished him the very best for the future, both personally and professionally.

Conti joined Milan back in summer 2017 from Atalanta but suffered a couple of serious injuries, so he went to Parma for the second half of the season via the formula of a loan with option to buy which would have become an obligation if they avoid relegation to Serie B.

The Italian played as a starter under D’Aversa, but they were ultimately relegated to the second division, though he has swooped in as the new Samp boss to reunite with Conti who starts a new chapter of his career aged 27.