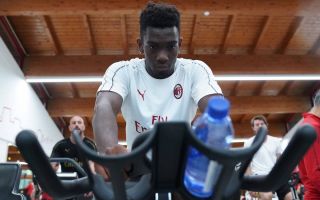 Official: Milan send 21-year-old striker out on loan for the third season in a row

AC Milan have confirmed that striker Frank Tsadjout has been sent on an initial loan spell to Pordenone.

Via a statement on their official website, Milan have announced that Tsadjout will be joining Pordenone Calcio on a season-long loan deal which includes an option to buy in favour of the Serie B club, but Milan are protected by a buy-back clause.

The club went on to wish Tsadjout all the best for the upcoming sporting season. Tsadjout – a Perugia-born striker who came through the youth system at Milan – spent the 2019-20 season on loan at Belgian side RC Charleroi, but he amassed just one goal in 10 appearances.

The 21-year-old was given a fresh opportunity to show what he can do when he joined second division club AS Cittadella for the 2020-21 season on a dry loan, but he made just three appearances in Serie B and scored one goal. Now, a new loan spell awaits.

READ MORE: Milan to complete signing of defender for €4m in the next 48 hours