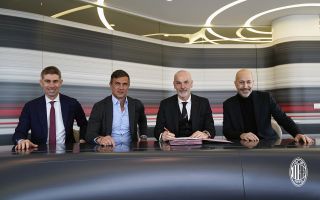 AC Milan head coach Stefano Pioli has extended his contract until 2023, the club have confirmed via a live stream during which they showed the moment of his signing.

Stefano Pioli fairly recently celebrated his 100th game in charge of the Italian giants (vs. Bologna) Seven games into the 2019/20 season, Pioli was brought in as a surprise replacement for Marco Giampaolo. Since then, he has led Milan to 5th and 2nd place finishes in the league, guiding the Rossoneri to their first Champions League qualification in seven years.

Pioli has done a fantastic job with what is a very young squad, and he led the team to their first Champions League win under his tenure on Wednesday night, which is doubly perfect timing to renew given that the next game is against Sassuolo.

Many of you will recall that Sassuolo were Milan’s opponents last time Pioli renewed amid a fantastic post-lockdown run, ending the rumours of Rangnick’s imminent arrival. Now, he has earned an extension for another year until 2023.