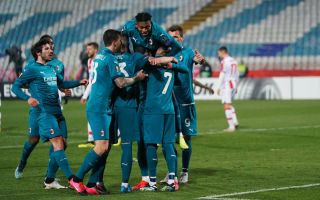 AC Milan have named their squad for tonight’s return leg against Manchester United and it is bad news as four key players are out due to injury.

The tie is perfectly poised after a 1-1 draw at Old Trafford last week, in which Simon Kjaer’s injury time header gave Milan a vital away goal and a deserved draw, cancelling out Amad Diallo’s header early in the second half.

The good news is that Zlatan Ibrahimovic and Ismael Bennacer are back in the squad, but the bad news is that none of Davide Calabria, Rafael Leao, Ante Rebic, Alessio Romagnoli and/or Mario Mandzukic are available for the game.

Below are the 20 players that Pioli has called up for the game, as confirmed by the club’s official website…