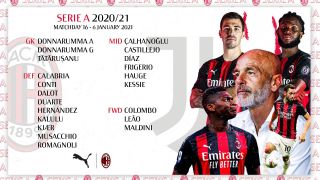 AC Milan boss Stefano Pioli has only been able to name a 21-man squad for the game against Juventus at San Siro tonight.

The Rossoneri have confirmed on their official website that Ante Rebić and Rade Krunić have tested positive for Coronavirus after a molecular swab test carried out yesterday. The asymptomatic players remained in isolation at home where a second control swab was taken today.

Ibrahimovic, Bennacer, Saelemaekers and Gabbia will be missing too through injury, while Sandro Tonali is suspended leaving a crisis in the midfield department.

Pioli has called up the 21 players he has at his disposal, and the squad has been confirmed on the official website.