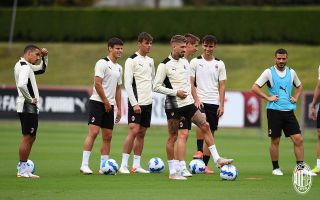 AC Milan head coach Stefano Pioli has named a 21-man squad for tonight’s game against Venezia at San Siro amid an injury crisis.

Zlatan Ibrahimovic is still suffering with swelling in his Achilles tendon and has been left out, while Olivier Giroud is still battling pain in his back and left training early on Tuesday so he will be rested.

There isn’t much depth in midfield either as Tiemoue Bakayoko sustained a calf muscle problem in the win over Lazio and will not be available and Rade Krunic is still battling a muscle issue in his right calf.

Junior Messias is not at his best physical condition and will have to wait to make his debut, while finally in defence both Davide Calabria and Simon Kjaer are expected to miss the next two games with slight muscle strains.

Below are the players that have been called up for the game, as confirmed by the club’s official website…