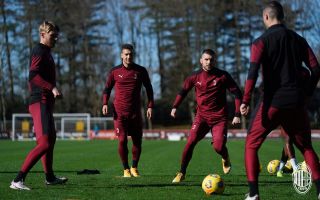 AC Milan boss Stefano Pioli has named a much healthier looking squad ahead of tomorrow’s trip to face Spezia.

Milan head to La Spezia knowing that a win would see them keep top spot ahead of the following weekend’s derby against Inter, and he will have an almost fully-fit squad.

Pioli will have to do without the suspended Davide Calabria and the injured duo of Brahim Diaz and Daniel Maldini for the trip to Liguria.

With the final touches at Milanello done, Pioli named his 23-man squad for the trip to Liguria, which has been confirmed by the club’s official website.

You can read the latest on the predicted XI here, as well as Pioli’s pre-match press conference in full here.