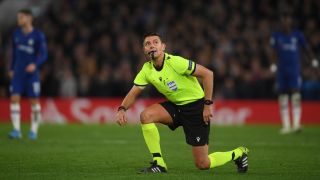 Official: Rocchi will officiate Juve-Milan; Massa in charge of VAR

On Wednesday evening, Juventus will host AC Milan at Allianz Stadium for the Coppa Italia semi-final return leg. With a current aggregate score of 1-1, it will be a tough task for the Rossoneri to advance to the final.

Stefano Pioli will have to do without the likes of Samu Castillejo, Theo Hernandez and Zlatan Ibrahimovic, who are all suspended. In other words, what would be a tough challenge under normal circumstances, is now even tougher.

Earlier today, the officiating team for the important game was announced (via MilanNews.it). The experienced Gianluca Rocchi will be the head referee, while Davide Massa will be in charge of VAR on the night.

It will be the first Milan game for the former this season, while the latter has officiated one Milan game this season (0-0 against Sampdoria at San Siro). Hopefully, there won’t be any controversy in the game, given the importance of the clash.