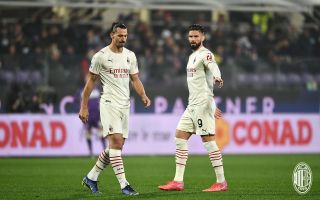 MN: Pioli left with selection doubt ahead of trip to face Atletico Madrid – the latest

AC Milan boss Stefano Pioli currently has an idea in mind about who will start up front in Wednesday night’s game against Atletico Madrid, a report claims.

The Rossoneri will face Diego Simeone’s Atletico with both teams desperately needed a win. The LaLiga champions will be hoping to secure three points and move into a commanding position ahead of the final round of group stage action with Porto facing the daunting trip to Anfield to face Liverpool, while a win and by a margin of over one goal is pretty much the only way Milan can stay alive in the competition.

MilanNews brings an update on an important selection doubt for Pioli as the Rossoneri coach has not yet chosen who will be the centre-forward against Los Cochoneros. At the moment it seems Oliver Giroud is ahead of Zlatan Ibrahimovic in the ranking, despite the fact the Swede scored a brace in the away defeat against Fiorentina over the weekend.