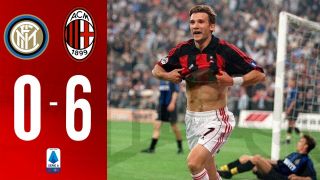 On This Day: Milan destroy Inter 6-0 in 2001 as fan begs Costacurta for mercy – video

AC Milan completed the most one-sided derby victory against Inter on this day 20 years ago, beating the Nerazzurri 6-0 at San Siro.

Milan dominated both halves from beginning to end and it took the Rossoneri just two minutes to break the deadlock as Gianni Comandini volleyed the ball in after a cross by Serginho. Fifteeen minutes later Milan doubled their lead in a similar fashion, with Serginho again finding Comandini.

In the second half Giunti scored the third goal using a free-kick, Shevchenko scored twice in the 66th and 77th minute while Serginho got a goal of his own to cap the win. It was such an embarrassment for Inter that a fan ran on the field and begged Costacurta to have mercy.