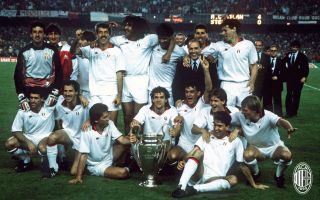 May 24 is a significant day in the history of AC Milan for a couple of reasons, both domestically and in terms of European football.

In fact, it was on this day in 1989 that the Rossoneri won their third European Cup by beating Steaua Bucaresti 4-0 at the Nou Camp in front of an estimated 80,000 of their own fans.

French outlet L’Equipe remarked after the game that: “After seeing this Milan, football will never be the same again.”

🏆 #ACMilan won the European Cup in front of over 80,000 of their own fans at the Nou Camp, beating Steaua Bucaresti 4-0.

🗣 "After seeing this Milan, football will never be the same again." – @lequipe

Three years after that, May 24 would be significant again as Milan beat Foggia 8-2, thus bringing to an end a season in which Fabio Capello’s side did not lose a single Serie A game, winning 22 and drawing 12.

🏆 #ACMilan made history as they finished the 1991-92 Serie A season unbeaten with an 8-2 win over Foggia.