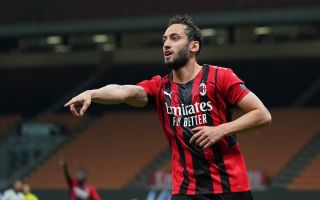 Ordine questions Calhanoglu: “These are the matches that show who is a champion and who is not”

Journalist Franco Ordine has claimed that Hakan Calhanoglu isn’t worth the contract he is demanding, and that a top four finish now seems unlikely.

After having scored 12 goals in the three games leading up to last night’s fixture against an already safe Cagliari side, Milan knew they simply needed to win to secure a return to the Champions League, but they failed to even do that.

It was a slow and lethargic performance from Milan as they did not manage to break down an away side that seemed to be very happy to sit and contain, and they have now left themselves with it all to do on Sunday against Atalanta knowing only a victory guarantees a top four finish.

Speaking on Pressing, Ordine spoke about the Rossoneri after the 0-0 against Cagliari and it seems that even his spirit has now evaporated, with his comments transcribed by MilanNews.

“Let’s face it, now I see Milan in fifth place. These are the matches that show who is a champion and who is not. Calhanoglu, for example, he asks for 5 million but is he worth it?”