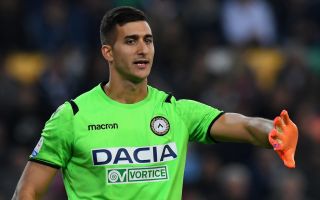 AC Milan are keen on signing Udinese goalkeeper Juan Musso this summer amid doubts about Gianluigi Donnarumma’s future, a report in Argentina claims.

Reports have suggested Chelsea are serious about landing the 21-year-old, while Juventus, PSG and Real Madrid have also been repeatedly linked.

Musso is one of the players who has been touted as a potential replacement for Donnarumma, with a report from La Gazzetta dello Sport over the weekend claiming Milan could launch an attempt to sign the €15m-rated stopper this summer.

According to what has been reported by radio station ‘Racing es Rock’ (via Calciomercato.com), the Diavolo are indeed keen on signing the former Racing Club goalkeeper, with Udinese having set a price tag of €30million.

This is of course relevant to the Argentine side as they will be due some of the proceeds should the Biaconeri sell their star keeper.