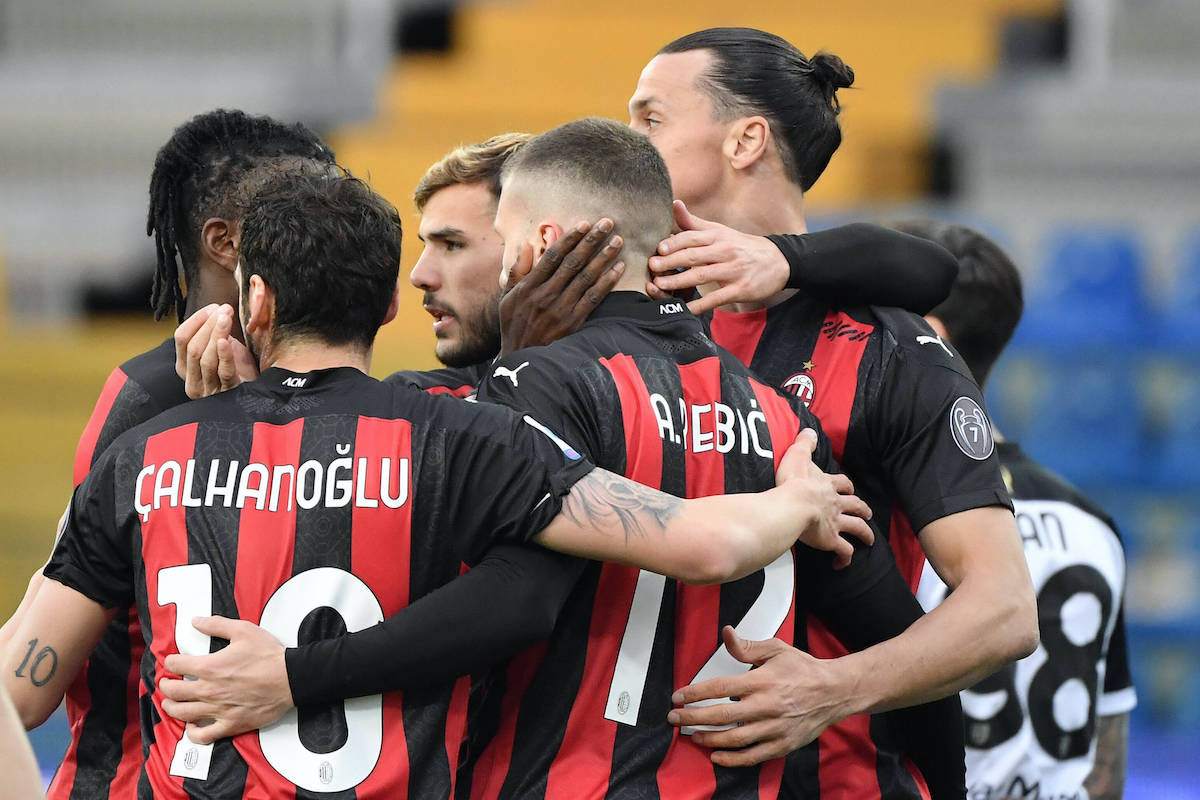 AC Milan once again found comfort on their travels as they ran out 3-1 winners over relegation-threatened Parma on Saturday evening.

It was all going very swimmingly for Milan at the interval as strikes from Franck Kessie and Ante Rebic had established a two-goal lead going into the break, with Zlatan Ibrahimovic playing a big hand in both goals.

However, the red mist descend for the 39-year-old as he was sent off with 30 minutes remaining after saying something to the referee Fabio Maresca. Riccardo Gagliolo then halved the deficit for the hosts to make it a very nervy conclusion.

Nevertheless, Milan not only held on for the three points but they secured them thanks to a late goal on the break from substitute Rafael Leao, to move seven points clear of Napoli in fifth place for the time being, although they will play tomorrow as will Roma, Atalanta and Juventus.

Head coach Stefano Pioli was able to call upon what was very close to being a first choice starting line-up as Ante Rebic and Alexis Saelemaekers returned to the wings, with only Davide Calabria and Alessio Romagnoli out due to injury.

The first half chance of the game came after five minutes when Franck Kessie was allowed to stride into space and let fly from 25 yards, but the Ivorian’s effort from range was deflected as he attempted to recreate the screamer against the same opponent last season.

A few minutes later, Milan did take the lead and it was thanks to some excellent work by Zlatan Ibrahimovic. The Swede held the ball up well near the edge of the box and fed Rebic, who spun and allowed the ball to run behind him before firing into the top corner with a venomous finish.

The Rossoneri kept their foot on the gas and continued to carve out openings. Ibrahimovic stroked the ball wide to Theo Hernandez and then collected his cut-back after a dummy, though his effort was blocked and spun behind for a corner.

Theo was bright in the early stages and twice he found space to run at Parma down the left flank, though the first time a clearance cut out the danger and the second saw him take a touch too many. Shortly after the latter, Hakan Calhanoglu was yellow carded for a foul on Kurtic.

The game became quite sloppy and disjointed either side of the half-hour mark, with the only notable chance being a free-kick whipped over from the right side by Calhanoglu and headed over by Ibrahimovic, who was in space at the far stick.

Just a few minutes before the break, the Diavolo ensured that they would take a two-goal lead into the break. Some excellent link-up play between Hernandez and Ibrahimovic saw the ball eventually rolled through to Kessie with a nice reverse pass, and the 24-year-old finished well into the bottom corner past Sepe.

The first major action of the second half saw Donanrumma called into an incredible double save. He made a sensational one-handed stop to deny Milan loanee Andrea Conti’s header, and then he leapt to his feet and blocked a follow-up from close range.

Pioli’s men had a big chance to put the game to bed 10 minutes into the second period but Ibrahimovic slightly overweighted his pass through to Rebic, who was alone and in on goal.

There was an extraordinary moment with 30 minutes remaining as the referee Fabio Maresca gave Ibrahimovic a red card after the Swede appeared to say something to him, meaning Milan went down to 10 men with a large portion of the game still to play.

Minutes later, Parma halved the deficit. An excellent downward header from Graziano Pelle found Gagliolo inside the box and he bundled home from close range, beating Donnarumma to the ball who hurt his hand in the process.

Pioli made a double change just inside the final 20 minutes as Bennacer and Saelemaekers made way for Soualiho Meite and Diogo Dalot. After Cornelius had fired wide inside the box for Parma more changes followed, with Rade Krunic and Matteo Gabbia coming on for Kalulu and Calhanoglu.

It became obvious that Parma were happy to go direct and look to win the second ball inside the box, with Cornelius having shots blocked or sailing wide on a couple of occasions. A final roll of the dice came when Rafael Leao came on for Rebic.

It would be Leao who went on to seal the deal in the dying seconds as he received a feed from his compatriot Dalot – who did exceptionally to carry the ball forward on the counter – and slotted into the bottom corner to ensure the three points would be returning home.