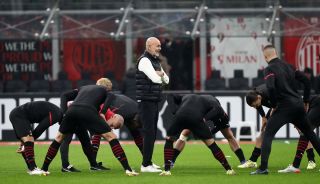 CorSera: No peace for Milan as Pioli catches the flu – his status for Udinese clash

In addition to the many injuries, Stefano Pioli has caught the flu and that’s why he was forced to cancel the press conference yesterday. For the game between AC Milan and Udinese, though, he should be there.

The Rossoneri really can’t catch a break at the moment, with a total of eight players out injured and plenty of them being key players. And it was topped off with the news that Pioli has caught the flu and has a fever.

According to Corriere Della Sera (via MilanNews), though, the manager should be on the sidelines tonight and coach his team as usual. He will most likely take some pills and then go with it, but it’s clear that Milan don’t have peace at the moment.

Pioli’s men will be eager to claim all three points this evening and thus make it three consecutive league wins after a rather tough November (which included two losses).

READ MORE: Distance of €800k remains but Milan are confident about Bennacer’s renewal