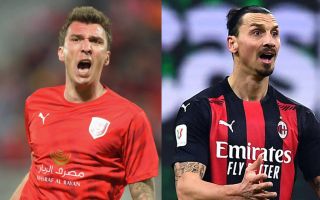 Pedulla: Mandzukic and Ibrahimovic could play together given the Croatian’s versatility

It is not excluded that AC Milan could use Zlatan Ibrahimovic and Mario Mandzukic at the same time if they were to sign the latter, a report claims.

As we reported, Milan – despite the usual denials in interviews – are looking for a striker who can rotate with Zlatan Ibrahimovic and complete the Rossoneri attack.

During discussions with the well-known agent Giovanni Branchini, the idea of ​​signing Mario Mandzukic was born. A six-month contract is possible, and although they have a handful of candidates and at the moment the number one among them is Mandzukic.

According to Alfredo Pedulla, the Croatian is ‘close to returning to Italy’ with Milan strongly pursuing him, and the 34-year-old is waiting for the right place to resume his career.

Interestingly, the journalist adds how the initial idea is to use the Croatian as a deputy to Ibra, but it is not excluded that the two can co-exist on the field, given that – during his time at Juventus – he was often used on the left by Allegri, showing his ability even in the defensive phase.