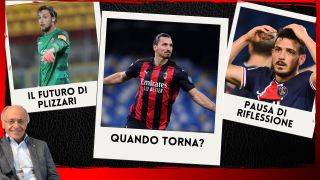 Pellegatti: Why Milan’s pursuit of a third striker has become ‘important’ and where they may arrive from

AC Milan’s pursuit of a third striker has become more urgent because of the latest updates on Zlatan Ibrahimovic, according to Carlo Pellegatti.

Pellegatti spoke on his YouTube channel (via MilanLive), took stock of the situation regarding the centre-forward department, confirming the rumours from earlier today suggesting that Ibrahimovic’s recovery is being managed with caution and therefore the optimism regarding a quick recovery has evaporated.

Now, the pursuit of a third striker becomes ‘important’ as per the journalist. The ideal would be that he is a flexible player who could also operate on the right wing if needed, but in the meantime Rafael Leao and Ante Rebic have shown even in the recent friendly matches their difficulties have been made apparent.

Kolo Muani of FC Nantes was thought of as a target but he will not be sold so the Rossoneri management need to find someone else, perhaps in France or Belgium, because finding a player like that in Serie A seems difficult.