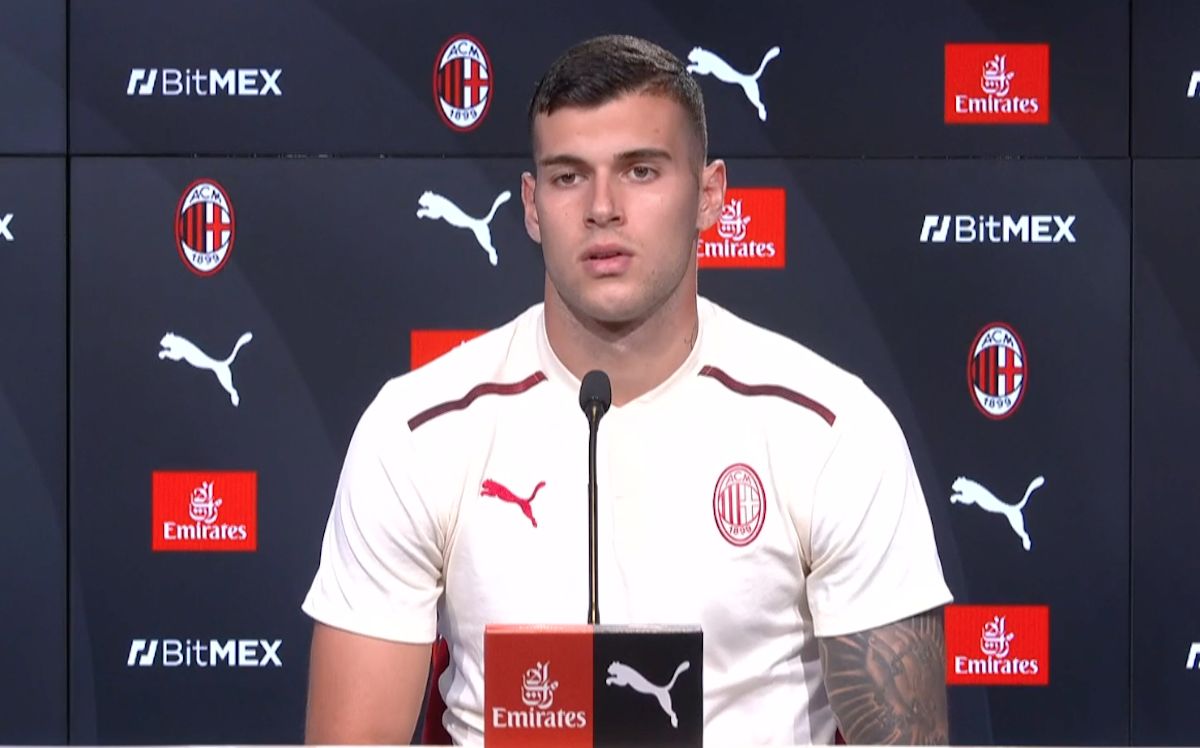 Pellegri describes emotion of joining Milan and proclaims: “My goal is to convince the club to buy me”

New signing Pietro Pellegri has expressed his desire to ‘repay the faith’ that AC Milan have shown him, and is relishing being back in Serie A.

A statement on the club’s official website yesterday confirmed that Pellegri has joined the Rossoneri on an initial loan deal with the option of a permanent acquisition at the end, which becomes an obligation upon the occurrence of certain conditions. He will also be the first ever No.64 in Milan’s history.

Pellegri spoke in front of the reporters who gathered at Milanello for his unveiling press conference where the striker answered a number of questions about his arrival, with his comments transcribed by MilanNews and translated below.

You scored a goal in Totti’s farewell game and yesterday you met Maldini. There are great characters in your career…

“Even if the experience at Monaco was not lucky, now the future is downhill.”

Your first experiences with Milanello and the team?

“I found a structure where there is everything and I found a familiar atmosphere.”

What emotions do you have about playing with Ibrahimovic and Giroud? The reason for your jersey number?

“Playing with these two strikers and for Milan is a dream. I came to Milan to learn. The choice of the jersey number is for the year of my father’s birth.”

Do you want to restart in Serie A?

“I arrive here with the desire to redeem myself and to repay the trust of the club.”

Is it true that Ibrahimovic is your idol?

“It was a wonderful experience meeting Ibrahimovic. Since I was little he has been my idol and when I gave him high five yesterday it was wonderful.”

Do you remember your dad’s tears and what do you need to learn from Ibrahimovic?

“From a champion like Ibrahimovic there is a lot to learn. My father’s tears at the debut were normal. Seeing his son score in the stadium of their city is a great emotion.”

How do you rate the experience at Monaco?

“The experience at Monaco, even if it was not positive, I would do it again. It taught me a lot and it is an experience that I would do again.”

Do you think you have paid for bad luck and are tyou aiming to stay at Milan for a long time?

“My goal is to convince the club to buy me and I want to stay here in this great club. Yes I have been unlucky but now I only think about positive things.”

What word would you use to describe the experiences at Genoa and Monaco? Which one instead for the move to Milan?

“Genoa was home. Monaco was a formative experience where I grew up a lot. Milan is a dream.”

Have you already talked to Pioli?

“The coach expects determination and desire to work. I want to grow, improve and be available to the team.”

Have you set yourself goals?

“I haven’t set any goals for myself. I go out on the pitch to give my best and help the team. If you play at your best, the goals will come.”

You will be satisfied at the end of the season if…

“If we achieve the goals of the club.”

Have you already been close to Milan? What should fans expect from you?

“Willingness to work and determination must be expected.”

How much do you think about the national team?

“It’s a dream and it remains a dream that can then become a goal, I don’t hide it. Everything comes with work and determination.”

Did Pioli give you any specific tasks in the first interviews?

“No, he just told me that he expects players with determination and desire to work and that they are willing to help the team.”

What can Giroud teach you?

“He too is a player who has won a lot. He is a great champion who can help me a lot, I will study him in training and I will learn a lot from him.”

What is the thrill of playing the Champions League?

“For all children it is a dream to play this competition. It is also a dream for me.”

Is it the right time to prove that you are staying at Milan?

“Yes it is. I want, I have determination and hunger to stay at Milan and show my qualities.”