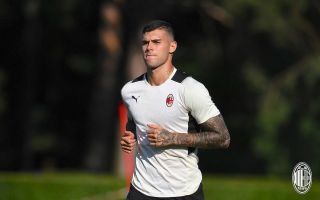 AC Milan head coach Stefano Pioli has been left with little attacking depth again after more injuries plagued his side, so he must get the most out of the resources available.

MilanNews writes how there is player who must use these current circumstances to find himself after a few years in which he has suffered because of several injuries, and it is Pietro Pellegri. With Ante Rebic and Olivier Giroud on the sidelines with muscle problems and with Zlatan Ibrahimovic not able to play every game at 40 years old, Pioli needs Pellegri more than ever.

He arrived on loan with an option to buy from Monaco in the summer but has so far played only 82 minutes in the league during which he has failed to convince, while he is not in the Champions League squad list.

Many were convinced that Pellegri would have a great future after his explosion as a teenager at Genoa but fast-forwarding to his current age of 2021 and things do not look as bright due to a seemingly endless series of injuries.

Pellegri will almost certainly get some minutes both tomorrow against Genoa and on Saturday against Salernitana – a match he might even start given it is just a few days before the decisive Champions League match against Liverpool.

READ MORE: Ligue 1 side open to sale of winger – talks on with Milan over formula with loan