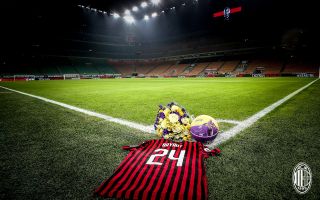 AC Milan have begun their tributes to Kobe Bryant ahead of Tuesday’s Coppa Italia game against Torino at San Siro.

A minute of silence will be observed before the game for Bryant, who passed away on Sunday after a helicopter crash. His daughter Gianna, 13, was also among the nine killed when the aircraft came down in Calabasas.

The players will also wear black armbands as a mark of respect to Bryant, who was a boyhood Milan fan having grown up in Italy.

The club have also paid their own tribute, laying flowers and a shirt with his name on in one corner of the San Siro pitch.