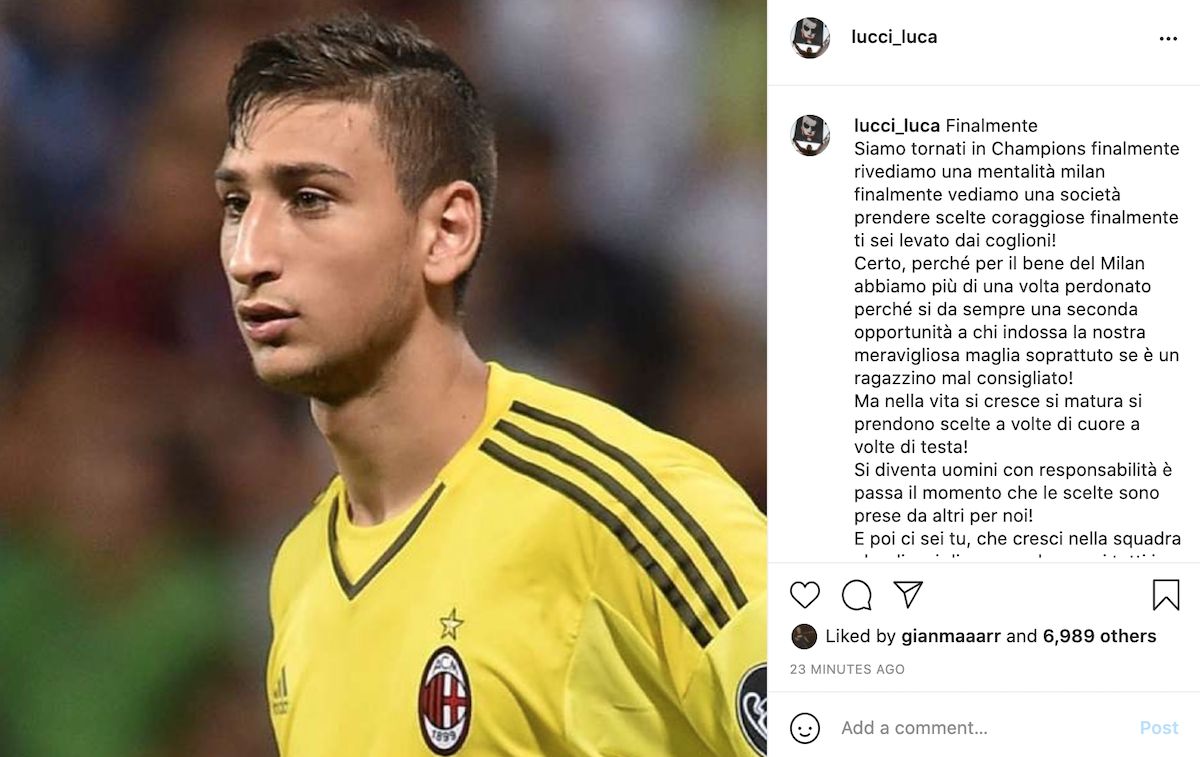 Photo: Curva Sud leader attacks Donnarumma – “You won’t be able to buy what you lose”

One of the leaders of AC Milan’s Ultras group the Curva Sud has launched into a scathing attack on Gianluigi Donnarumma on Instagram.

Most major sources are now reporting that Donnarumma is set to leave Milan after nine years at the club both with the academy system and with the senior side, where he has already racked up over 250 appearances and was on course to break plenty of records.

It is a painful separation for Milan who have already lined up Mike Maignan of Lille to replace Donnarumma, and Luca Lucci from the Curva Sud has expressed his anger.

“Finally. We are back in the Champions League finally we see a Milan mentality finally we see a club making courageous choices you finally got off your balls! Of course, because for the good of Milan we have forgiven more than once because there is always a second chance for those who wear our wonderful shirt, especially if they are a badly advised kid!

“And then there is you, who grew up in the team you said you loved, who had all the fans on your side who wear the captain’s armband of that glorious team and finally with that team you can play the Champions League that at twenty you earned 6 million a year with, you do not miss anything more cars a beautiful house, boat holidays a dizzying bank account and they offer you two more so that you could never fall into poverty!

“Yet it is not enough because you want more, much more, more and more! In the belief that your agent is the goose that lays the golden eggs, neglecting that he works for you! I wish you the best I wish you lots of money I wish you new machines new houses plus current accounts!

“You won’t be able to buy what you lose today! The respect of the people, that respect that when one looks at you they say ‘he is really a beautiful person’. You will never be that, always the ungrateful boy, the attack boy, the boy with the money, the Raiola boy!

“And if no one is desperate for you, ask yourself two questions … you are a liberation! No more tarantellas, no more talking about you and your agent, no more soap operas, no more blackmail!
Finally! Show some balls. Here is the evil of football! Protected and raised to Gods… Long live the ultras who once again saw it.”