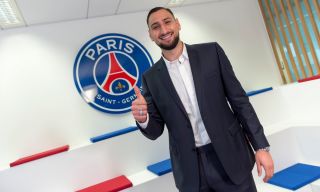 Photo: Donnarumma finally unveiled as a PSG player – Maldini comments on his exit

Donnarumma decided to depart Milan, the team he came through the youth academy at, despite the fact that they confirmed a return to the Champions League with a second-placed finish last season.

The 22-year-old has had his say on the exit, implying that it was merely a career choice and insisting he is still attached to Milan, while PSG have now confirmed on their official website that the Italian goalkeeper has signed a five-year contract until 30 June 2026.

Technical director Paolo Maldini has now had his say on the parting of ways as he spoke to DAZN.

“He is a big loss for us even if we have signed a great goalkeeper. He grew up in our academy and seeing what he has done at Milan, the fact that the story is interrupted hurts a little. It is right to think about the past but the future is more fascinating,” he said (via MilanNews).