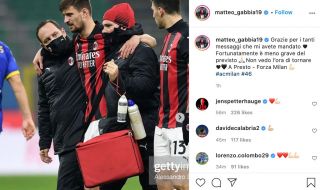 Photo: Gabbia responds to injury news on Instagram – ‘Fortunately it is less serious than expected’

AC Milan defender Matteo Gabbia has reassured fans that his injury is ‘less serious than expected’ through a post on social media.

According to what is being reported by MilanNews, the initial diagnosis has been confirmed that Gabbia has sustained an injury to the collateral ligaments of his left knee. Any meniscus damage has been ruled out, but his recovery is still expected to take over a month.

📱 Matteo Gabbia on Instagram: "Thank you for the many messages. Fortunately it is less serious than expected. I can't wait to see you again. See you soon. Forza Milan." pic.twitter.com/EneVO8qMxc