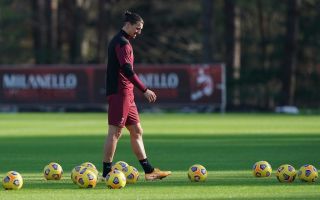 Zlatan Ibrahimovic has marked his return to training with a customary post on social media, declaring he is back with his ‘best friends’.

Ibrahimovic has been out for the last five games with a hamstring strain, but there have been reports that he is closing in on a return, and pictures on the club’s official social media channels confirmed that he is back in training.

Sky (via MilanNews) are reporting that Ibrahimovic will most likely not be risked on Wednesday against Genoa, but the striker is happy to be back…

Me and my best friends pic.twitter.com/ukgC52DVWN