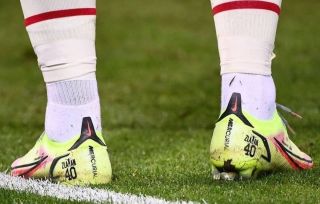 Photo: Ibrahimovic sends message to his doubters after performance vs. Roma – ‘Reminder’

Zlatan Ibrahimovic sent a message to his doubters on social media after his brilliant performance during last night’s 2-1 win against Roma.

Ibrahimovic was the decisive man at the Stadio Olimpico as he scored a first half opener from a free-kick before winning a penalty in the second half that doubled the advantage, all while being targeted by racial abuse from Roma fans.

He took to Twitter after the game to send a ‘reminder’ to everyone with a photo of his boots that have ‘ZLATAN 40’ emblazoned on them.