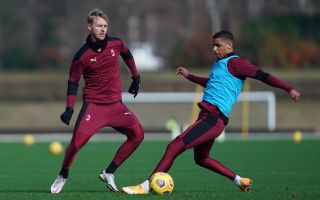 Photo: Kjaer celebrates return to training with the group – “Feels great to be back on the pitch”

A big boost has arrived for head coach Stefano Pioli and the AC Milan squad as Simon Kjaer returned to training with the group today.

Kjaer has been out with a thigh muscle problem since the derby against Inter in the Coppa Italia last month, with some fearing at the time it may be another lengthy absence.

However, the Dane has recovered in good time – which he has been able to do thanks also to the impressive work by Fikayo Tomori who stepped in well – as he celebrated his return to training.

“Feels great to be back on the pitch,” he said on Twitter.

Feels great to be back on the pitch👊#SempreMilan 🔴⚫️ pic.twitter.com/RHuCO54hTm