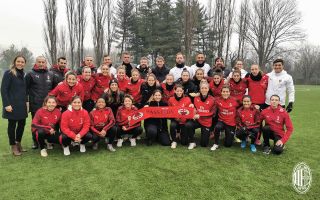 AC Milan directors Paolo Maldini and Ricky Massara were present at the training ground of the Women’s team to wish them a merry Christmas.

The Rossoneri have started the season well so far, beating Inter in both the Serie A Femminile and the Coppa Italia Femminile.

They currently sit in fourth place in the standings, eight points behind Juventus Women with a game in hand, a team who they drew against thanks to a last gasp equaliser.

Maldini and Massara congratulated the team for their first half of the season and wished them all a happy festive period.