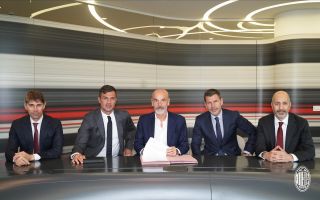 Stefano Pioli has been officially named as the new head coach of AC Milan following an announcement on Wednesday.

Marco Giampaolo’s sacking was confirmed on Tuesday after just 111 days in charge – the shortest reign of any manager in the club’s history.

Pioli then arrived at Casa Milan this morning to sign the contract, and the club confirmed his appointment via a statement on their official website.

Widespread reports have claimed that the former Lazio, Inter and Fiorentina boss has signed a two-year deal with Milan – with a couple of interesting clauses.