Manchester United midfielder Paul Pogba has squashed any accusations that Zlatan Ibrahimovic may have used racist language against Romelu Lukaku.

There was certainly plenty of controversy during last night’s Coppa Italia quarter-final as Ibra and Lukaku clashed just before half time, with the pair exchanging plenty of insults. The Swede made a provocative comment but a clever one related to Lukaku’s past, and never xenophobic.

Paul Pogba has jumped to the defence of his former team-mate on Twitter, stating: “Zlatan… racist? 🤨 He loves me too much so he’s the last person I’d think of as racist! Come on, don’t joke with that one!” he said. 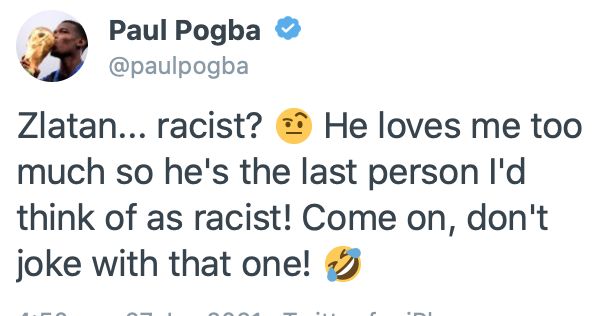