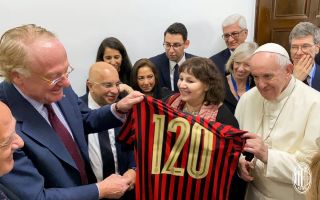 Pope Francis was presented with his own AC Milan shirt on his 83rd birthday by club president Paolo Scaroni.

Jorge Mario Bergoglio – to give him his full name – is the head of the Catholic Church and sovereign of the Vatican City State and is as a result a very important figure in Italy.

With Milan themselves having celebrated a birthday on Monday, the club extended their spirit by giving the Pope his own AC Milan shirt.

Hailing from Argentina, he is in fact a fan of his home club San Lorenzo, but appears to be happy with the gift from the Devil – so to speak.