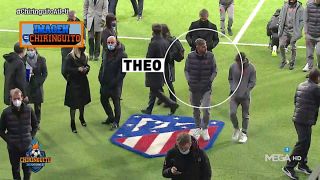 Photo: Spanish media outraged at something Theo Hernandez did at Atletico Madrid’s stadium

El Chiringuito TV are not happy with the fact that Theo Hernandez walked across the Atletico Madrid badge on the sidelines of the pitch at the Wanda Metropolitano.

The Milan full-back spent 10 years with Atletico as a youth player – which if anything gives more reason for him to show respect – but the Spanish broadcaster believe he stepped on the badge deliberately. The replies on Twitter confirm that many – including Atletico players – have done so before him.

The screenshot of the video has certainly caused a stir on social media with most believing it to be a misguided attempt to wind up fans before the game, while some insults have been directed at Theo, given his Real Madrid past too.