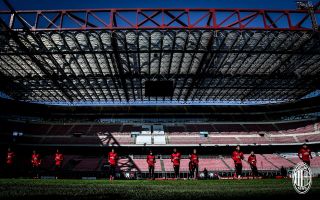 On the eve of the clash between AC Milan and Genoa, Stefano Pioli’s men trained at San Siro to get a sense of what it’s like without the crowd at the stadium.

Due to the Coronavirus outbreak in Italy, the game will be played behind closed doors. In other words, no fans will be allowed at the stadium, and this is something that the players will have to get used to.

Instead of Milanello, the Rossoneri had their last training session before the game at San Siro, as seen in the photos below. Hopefully, this will help the players familiarize with the idea of no crowd.