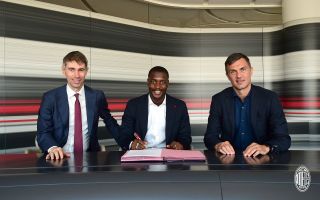 AC Milan have officially welcomed their fifth signing of the summer as Fode Ballo-Toure has joined from Monaco.

A statement on the club’s official website confirms the news reported over the last couple of days by numerous journalists, and announced that defender has signed a contract with the Rossoneri until 30 June 2025.

The club have confirmed that he will wear the No.5 jersey, and he joins Mike Maignan, Fikayo Tomori, Sandro Tonali and Olivier Giroud as the arrivals of the summer so far.

That’s all for your Day 1 🔴⚫
See you tomorrow 😉⚽#NewPlayerUnlocked #SempreMilan pic.twitter.com/22a7VmMVVe