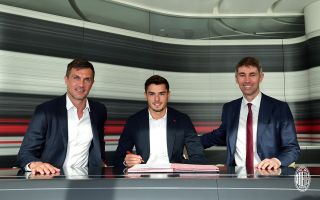 Brahim Diaz was all smiles as AC Milan confirmed that he has returned to the club on an initial loan deal from Real Madrid.

On their official website, the Rossoneri announced the return of Diaz this evening, stating that they have secured him on a two-year loan. However, the statement didn’t mention if there is a buy-out clause included in the deal.

Below are the pictures taken upon the signing of his contract, including the revelation that he will take the No.10 shirt vacated by Calhanoglu’s exit.