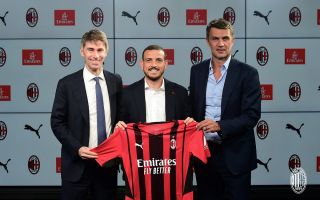 Photos: First snaps of Florenzi in red and black as he signs with Milan until 2022

After completing his medical yesterday, as well as putting pen to paper, Alessandro Florenzi has now been announced by AC Milan. The right-back is already training with the squad, eager to start the adventure off right.

The Rossoneri managed to secure him from Roma on a one-year loan with an option buy, which is indeed a good deal for them. The will of Florenzi helped, as he pushed for the move throughout the negotiations.

Shortly after the official announcement, the first picture of Florenzi in red and black started to spread on social media. Take a look at the below.

📸 Some more snaps of our new versatile Italian, courtesy of @acmilan 😍 pic.twitter.com/c5VUSfRtav