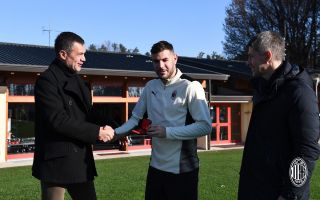 Theo Hernandez reached an important milestone for AC Milan in the game against Udinese, as he made his 100th appearance for the club. It was a shame that he didn’t get to celebrate with a win, though.

Since the left-back joined the Rossoneri from Real Madrid back in 2018, he has scored 16 goals and assisted an additional 18 with the red and black shirt. Impressive numbers, especially considering he’s a defender.

During today’s training session at Milanello, Hernandez received a gift from Paolo Maldini for reaching the milestone. Take a look at the photos below.

👏 @TheoHernandez: 100 appearances 👏
The award ceremony for our Rossonero speedster 🏃‍♂️🔴⚫