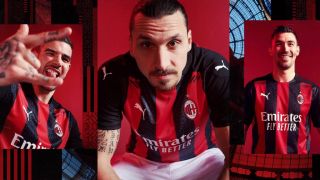 Photos: Ibrahimovic at the centre of Milan’s new shirt launch – a hint regarding his future?

Zlatan Ibrahimovic found himself front and centre of the advertising campaign for AC Milan’s 2020-21 home shirt.

A few weeks ago it seemed almost a guarantee that Ibrahimovic would be leaving at the end of the season, but the subsequent U-turn in the club’s plans regarding the arrival of Ralf Rangnick has seemingly reopened the door for the Swede to stay.

There have been rumours from most major media outlets suggesting Ibrahimovic wants to stay for another year, and perhaps the launch of Milan’s 2020-21 home shirt on Tuesday offered some clues that he will be wearing the jersey next season…