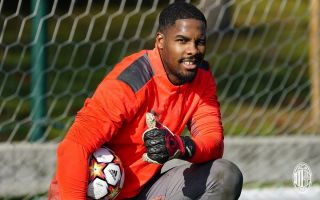 Photos: Maignan back to using his gloves as Milan prepare for UCL clash

Mike Maignan’s absence has been felt for AC Milan even since he got injured, but it was very evident last night. Ciprian Tatarusanu was responsible for a big howler and that set the tone for the entire game.

Maignan still has a fair bit to go of his recovery from the surgery he had roughly one month ago. Good indications have arrived from Milanello, though, as he back his goalkeeping gloves back on during today’s session.

Up until today, he had only worked with the team as an outfield player. Milan are proceeding with caution and he still isn’t expected to be back until 2022.