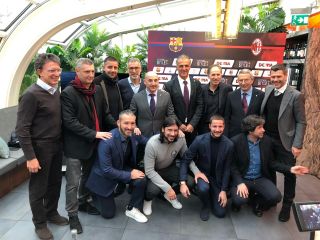 Legends from both AC Milan and FC Barcelona came together on Tuesday morning to celebrate the 120th birthdays of the respective clubs.

Milan had plenty of festivities planned for Sunday’s home game against Sassuolo, which despite the 0-0 scoreline was a fantastic occasion to celebrate 12 decades of the Rossoneri.

It was also announced that an official project with Barcelona would be launched called ‘Legends of Style’, which will commemorate the 120th anniversary of both clubs.

It will run until December 16, 2020 and will celebrate the bond that the two clubs have in terms of a ‘dominant mentality and the aesthetics of their style of play’ as well as ‘beauty, elegance and class, on and off the pitch’.

Below are images of a meeting between some of the most influential players from the two clubs, including an exchange of gifts.