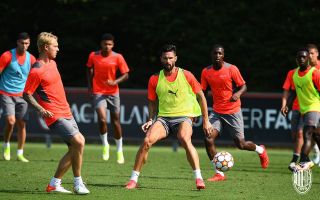 AC Milan have debuted some new training gear as preparations for the Champions League clash against Liverpool have gotten underway.

Despite a fantastic 2-0 win over Lazio at San Siro last night there is little time to rest as the team were back at Milanello preparing for Wednesday’s trip to Anfield when they will play their first game in Europe’s elite club competition for seven years.

To mark the UCL return some new training gear has been released, which appears to be bright orange and dark grey in colour scheme.