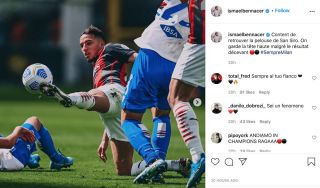 It was another frustrating afternoon for AC Milan as they were held to a 1-1 draw by Sampdoria at San Siro, rendering a title charge almost impossible.

The Rossoneri dropped yet more valuable points at home as Jens Petter Hauge’s late equaliser was needed to snatch a draw against a Sampdoria side who had taken the lead through Fabio Quagliarella and played the last 30 minutes with 10 men after Adrien Silva’s red card.

Bennacer: “Glad to be back on the San Siro pitch. We keep our heads high despite the disappointing result.”