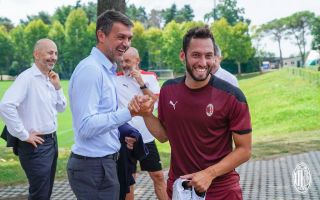 Photos: Milan squad return to training as Calhanoglu is presented with award

After a few weeks off following the late conclusion of the 2019-20 season due to the COVID-19 pandemic, Milan’s players have reported for preseason.

After Monday’s COVID tests, the team met at Milanello at 10:00am on Tuesday to begin the preparations for the new season. President Paolo Scaroni, CEO Ivan Gazidis, technical director Paolo Maldini and sporting director Frederic Massara greeted the team.

Thirty minutes later at 10:30am the team began their work with the classic muscle activation. After that, the team was divided into three groups that – alternating in three different areas of the field – performed aerobic work, technical exercises and a series of dedicated to muscle reactivity. Finally, there was a stretching session.

Meanwhile, Hakan Calhanoglu was presented with an award for AIC Player of the Month for July.

The boys are back in town. Time to get down to business. 💼 pic.twitter.com/2za7JOlzFa

🏆 Well done to @hakanc10 for winning the @assocalciatori Player of the Month for July!