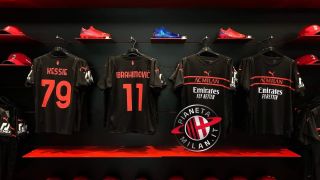 Yesterday marked the release of AC Milan’s third shirt for the upcoming season, and today it has officially gone in sale in shops.

Rather than having the usual crest on the front, PUMA have opted instead to put it on the back of the shirt and instead feature the ‘AC Milan’ word mark across the chest. The club badge is also featured all over the jersey, albeit in a more subtle way.

👕 The new third shirt (and goalkeeper shirt) is on sale now!