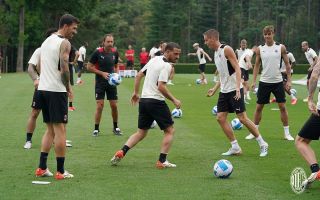 Alessandro Florenzi was announced by AC Milan earlier today and he took part in his first training session this morning as well. Although it’s short notice, he could perhaps be called up for the Sampdoria clash.

Milan will start their season on Monday as the 2021/22 season of Serie A will begin with two clashes tonight. It will be an important game to determine where the Rossoneri stand, although the pre-season gave good indications.

As said, Florenzi took part in the training session this morning and it remains to be seen when he will make his debut for the club. He will certainly come in handy for Stefano Pioli, given that he can play in many positions on the pitch.

Milan published some pictures from today’s training session, which you can take a look at below (see all of them on the official website).

📸 No time to spare for @Florenzi, cracking on at Milanello 🙌 pic.twitter.com/4wnXrGdqNx

READ MORE: Pellegri will get to play with his idol Ibrahimovic as Milan move is close