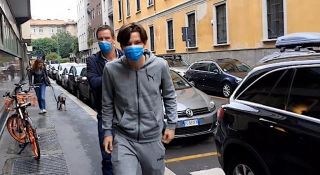 Photos: Sweden U17 captain arrives in Milano for medical ahead of Rossoneri switch

AC Milan are not only focusing on adding players to their senior squad this summer, but also bolstering the Primavera after their promotion.

Wilgot Marshage is the latest recruit as he will sign from IFK Lidingo. The 16-year-old Swedish midfielder follows Emil Roback and Lukas Bjorklund in making the move south to Italy, and he arrived at 9:15am at La Madonnina clinic in Milan to carry out the usual medical examinations.

In the afternoon he will sign the contract that will bind him to the Rossoneri and will begin work with Federico Giunti’s Primavera.

Marshage is captain of the Swedish Under 17 national team and is considered a talent with good prospects for the future, with Milan having followed him for some time now. The teenager even underwent a trial in December and has now been able to sign.

📸Di Marzio: Wilgot Marshage has arrived and will undergo his medical tests today. He will be reinforcing the Primavera. pic.twitter.com/dd50vsZvL8