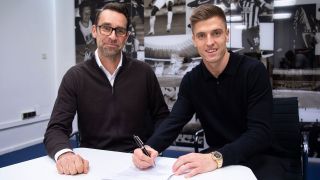 Piatek reveals why he chose Hertha Berlin despite links with Spurs, Chelsea and Man Utd

Krzysztof Piatek has revealed why he decided to leave AC Milan and, in particular, why he rejected numerous advances from the Premier League to join Hertha Berlin.

The Poland international had fallen out of favour under Rossoneri head coach Stefano Pioli, who preferred using a strike partnership of Rafael Leao and Zlatan Ibrahimovic.

Despite this, Piatek was heavily linked with a move to England. The Times claimed earlier on Friday that Manchester United ‘were close to a deal’ for the 24-year-old which would have seen him join for 18 months loan before completing a permanent move in 2021.

La Gazzetta dello Sport’s Nicolo Schira reported that Chelsea were offered the striker, and Louis Girardi claimed the Blues submitted a €27m bid. Schira also stated Spurs were interested, confirming that contacts were ongoing at one stage between Tottenham and Milan.

However, it is the German capital club who have won the race, and they announced the capture of Piatek in a statement on Thursday night.

Piatek gave an interview to the club’s official website upon his arrival, and discussed why the German capital was the right place for him.

“The most important thing was the clarity of the plans the club has for me,” he said.

“We want to achieve the greatest goals together. As a striker, I want to score as many goals as possible for the Hertha and helping the team to move up the rankings.

“It is very important for me to start well in a new championship. We hope to qualify for a European competition next season.”

He also hinted that the destination as a city had something to do with it.

“My first impressions of Berlin are really good; of course I’ve only been here a few hours. I’m excited to be able to discover the city in the future, but first I want to get myself accustomed to Hertha BSC first.

“Downtime is really important to me and it’s good to relax. That’s what I like doing the most, especially when I get to spend time with my wife and family at home and take the dog out for a walk. It relaxes me and helps me to give my best performance out on the pitch.”