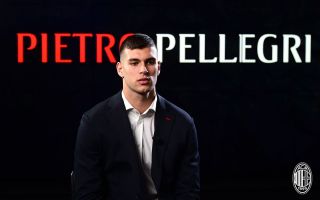 AC Milan addressed the issue of a third centre-forward with the signing of Pietro Pellegri last week, and he arrives with a point to prove.

A statement on the club’s official website has confirmed that Pellegri has joined the Rossoneri on a temporary basis with the option of permanent acquisition which becomes an obligation upon the occurrence of certain conditions. He will also be the first ever No.64 in Milan’s history.

As mentioned, he certainly joins with his stock not as high as it was four years ago when he made his debut, but this could be a retribution of sorts after some persistent physical problems. Here’s what Milan can expect from Pellegri…

Born on March 17th 2001, Pietro Pellegri is a product of the Genoa youth academy. Son of Genoa Assistant manager and team manager Marco Pellegri, Pietro equaled the record for the youngest player to have played in Serie A at 15 years and 280 days.

He took center stage when he opened the scoring for Genoa in Francesco Totti’s last home game at Stadio Olimpico (Roma would go on to win 2-1). Monaco – in a bid to replace their outgoing superstars in Bakayoko, Mbappe and Bernardo Silva – signed Pellegri for €25m in the winter transfer window of January 2018.

However, he played only 22 games for Monaco scoring 2 Goals and adding 1 assist. Pellegri has been plagued by injuries at Monaco but hopefully that changes at Milan.

Pellegri stands tall at 6ft2 (188 cm) and has a lean build which suits a very athletic style of play. The Italian likes to take long strides which in turn gives him the ability to accelerate very really quickly.

Being naturally quick and tall, it gives Pellegri the pace to be the striker who presses the centre-backs, not allowing them to settle. For Monaco, Pellegri scored a goal by tracking down passes and unsettling defenders, forcing them to make decisions quickly and subsequently concede mistakes.

From a manager’s point of view he is ready to work hard and cover the distance that would be required in a team that presses high, which is music to the ears of Stefano Pioli and the Rossoneri.

Something that Lukaku spoke about his time with Conte and Inter that struck was his ability to play with his back to goal. In modern football, even strikers are expected to have ability with their feet to bring other forwards and attacking midfielders into play, and to pull defenders out of position. With his hold-up play, Pellegri can help players like Brahim Diaz, Rafael Leao and others to make forward runs before finding them.

Against Sampdoria, Maignan demonstrated a different ability to play direct balls over the defensive lines, and with Pellegri Milan now have someone who can actually use his hold-up play and aerial ability to bring the ball down and bring team mates into play. Given his frame though, he needs to be more aerially dominant.

Pellegri has a very good first touch and a very soft trap, making him quite nimble-footed. This helps Milan as he is a good striker in a formation with a focal point centre-forward. Given his control it gives Pellegri the ability to be good on 1v1 and take defenders out, disturbing the structure of any opponent.

Tactically speaking, Pellegri can act as perfect foil to playing alongside a No.9 which gives Pioli the flexibility to play a two-striker formation with Milan now having depth in the striker department.

Where Pellegri lacks is in terms of concentration. Often he can be seen making silly errors and mistakes which can be avoided if he concentrated, such as giving the ball away or being taken to a part of the field where he cannot impact play as much.

There isn’t bundles of data to go on given how little Pellegri has played regularly in his senior career, but there are some interesting trends.

However, his xG per 90 drastically went up from 0.06 to 0.56 and his his xA per 90 also rose from 0.10 to 0.23. It is a sign that he grew in confidence, took on more shots and got more involved in the games, mostly likely dusting off some of the rust that comes with several annoying injuries.

Sadly, we must save the worst for last. Pellegri’s injury history is very worrying, as for someone who has played only 22 games in two-and-a-half seasons questions need to be asked whether Pellegri can make it big again.

A slight positive note for Pellegri is that his ACL is still intact, which is an injury that often recurs (as seen with Conti and Zaniolo) while muscle problems can be ironed out over time.

It must be remembered that Pellegri is younger than household names like Mbappe, Haaland and Sancho and has bags of potential. If Pellegri can stay fit he could be a great fit for the system.

Economically, it is a low-risk high potential reward signing, and another factor to consider is that he is going to be mentored by his idol Zlatan Ibrahimovic and another serial winner in Olivier Giroud. Hopefully he can imbibe a few qualities from the big men and take Milan forward.