AC Milan took the field against Pink Bari last Saturday and emerged the victors of the match with a score of 6-1.

The highlights of the match below…

Milan lined up in a 3-5-2. The most notable difference between this lineup and the previous ones is the fact that both Veronica Boquete and Refiloe Jane were rested for this game. They will return in the next match against Juventus. 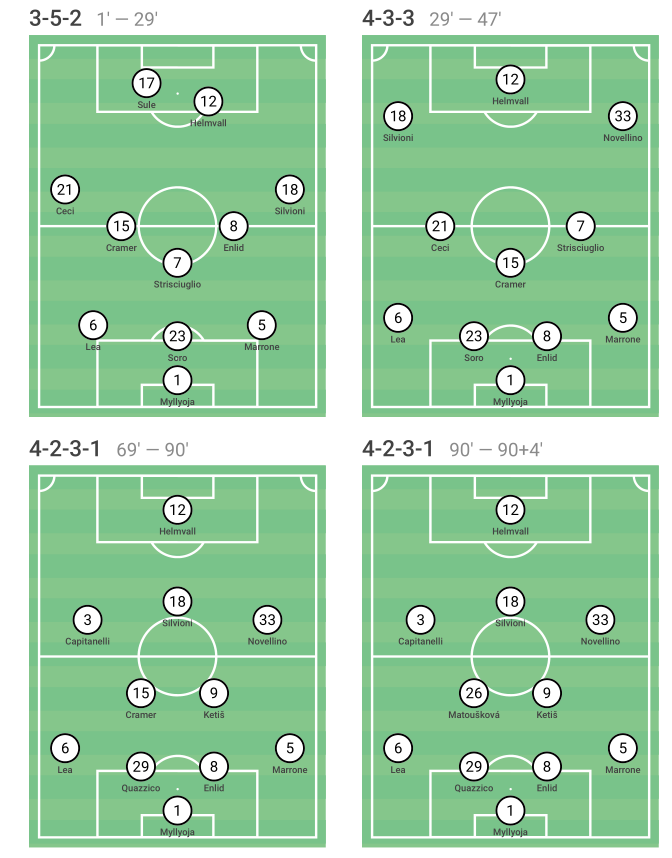 Milan like to build out from the back with Agard tasked with bringing the ball out. The centre-back orchestrates the side from which Milan creates their chances. Agard is usually flanked by Spinelli and Fusetti who act as overlapping centre-backs that press high with the ball. They are tasked with creating chances through their passes and getting balls behind the opposition defense.

Off the ball, Milan defended in a narrow 4-4-2 formation with Rizza falling back into the defense and Bergamaschi acting as the wide left-midfielder.

Whenever Rask, Grimshaw, and Fusetti participated in attack, Hasegawa would sit back in the back three to prevent quick counter attacks from Bari.

To press their opponents, Milan maintained a very high line as Bari was not particularly looking to press the Rossonere’s backline deep into their own half.

Milan also used various pressing techniques to put the squeeze on Bari. They would press the Rossobianca’s players deep into their own half whenever the ball reached the half-spaces. Once the ball was won back, they would then try to spring a counter-attack.

Milan also tried to restrict Bari to one side by creating a numerical advantage that would keep them pinned to the wings.

Milan used a variety of techniques to create chances in this game. The most basic tactic from them, was to use the overlapping or underlapping wingbacks in Rizza and Bergamaschi to create an overload on their right side.

Rask, Grimshaw, Fusetti, and Rizza worked together on the right to create a system where Rizza overlaps and puts in crosses from the flanks. Working in tandem like this has allowed the team to create many scoring opportunities, and it also won the free kick that allowed Hasegawa to score her first goal.

Milan also have this wonderful ability to create one-touch passes that will open up an opponent’s defense. An example of this would be this passing sequence, which led to Bergamaschi scoring the team’s first goal.

Milan also put balls behind the Bari defense. An example of this is Rask lobbing the ball over the defense. The pass led to their sixth goal and was Yui Hasegawa’s second of the match.

The Rossonere’s rather physical pressing and their quick verticality also gave way to Dowie’s goal.

Off the ball, Bari retreated into a 5-3-2 and tried to suffocate Milan with a very deep block. Once the ball was won back by the team, they would try to spring a counter-attack with direct, vertical passes to either Sule or Helmvall.

In the second-half, Bari was more adventurous and pressed Milan higher up the pitch. However, this left them exposed and created gaps in midfield, as they conceded two more goals in the process.

It was then followed up by Valentina Giacinti scoring this stunner. The Milan skipper also scored a brace during this match.

Natasha Dowie also scored her ninth goal of the match and thus cemented her title of being Milan’s highest-scoring foreigner.

Two of these goals were also assisted by Christy Grimshaw. The midfielder should be commended for her performance during this game, as she seems to have overcome the slump that plagued her earlier in the season.

The undisputed MVP of this match was newcomer Yui Hasegawa. The midfielder played a stormer on the match and capped off her fantastic performance with two goals.

Yui also had an 85% pass accuracy rate, converted 50% of her shots and won the 13 out of 23 duels, which means she won the majority of the contests she was in (Wyscout). Hasegawa also had the most possessions earned in the match, as she recorded 13 possessions in game (FIGC).

With this fantastic performance, it was no surprise that she was also voted by the MVP of the match by the FIGC as well.

Yui also played this match as a left centre-mid, which is a position normally occupied by Vero Boquete. This gives one pause for thought, as it means that we could see a change in Milan’s tactical setup, with Hasegawa on the left and Boquete playing in a more central or attacking role in future.

We’ll know what Ganz’s plans are for these two in the near future. On a final note, it seems that Hasegawa’s speed and touches made Milan play at a faster tempo, as the rest of the team had to accelerate their pace to keep up with her.

With this in mind, it makes Yui’s performance even more noteworthy. The team has certainly benefitted from her presence, and will only get better with her on it.

Not surprisingly, Milan were dominant during this match and the stats corroborated it. The Rossonere had 71% possession during the game. They also had a 79% pass accuracy rate and had nine shots on target. It was a dominant display from them and they were the deserved victors of this match (Wyscout).

Milan will take on Juventus at the Vinovo this Sunday. The game is a crucial one, as it will most likely determine who will win the Scudetto this season.

The Rossonere have only lost one match so far this year and coincidentally, it was against Juventus.

You’ll be able to watch it on the usual channels, including Sky, Milan TV, and the AC Milan app.

Match review was done in collaboration with Keralista.